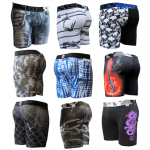 SAY NO TO BORING UNDERWEAR……

And get into SLY’s long leg 3 pack boxers.

Styled to match your mojo.

SLY mens underwear designs set their own trend and seek guys with personality to match!

With longer inseams chafing is somebody else’s problem. Plus these are probably the comfiest jocks you’ll ever own.

Who says mens underwear is boring. Stay SLY and grab this pack of randomly selected mens long leg underwear from our entire range.

If you’re one to get lucky with randoms, you won’t be disappointed.  Order this pack of SLY mens underwear online now.

FEATURES of the 3 pack boxers:

Going commando is not necessary.

Men love our long leg 3 pack boxers for good reason. We get your day off to the best start, support you through the day, prevent tugging and riding, and see you way into the night.

Read why chafing is a thing of the past  in SLY mens underwear.

Men’s underwear has come a long way since the loin cloth. Thank goodness we have progressed. To the modern bloke good ol’ tight-whities are not an option.

Get yourself sorted. Underwear is the first thing you put on. The base layer of your daily armour. Don’t underestimate just how much a perfectly-fitting pair of underwear can improve your day. Maybe your night too!

There are no reviews yet.